[We walked to meet our sightseeing tour.  But before we left the hotel, the Super wanted to be “throned” . . . ] 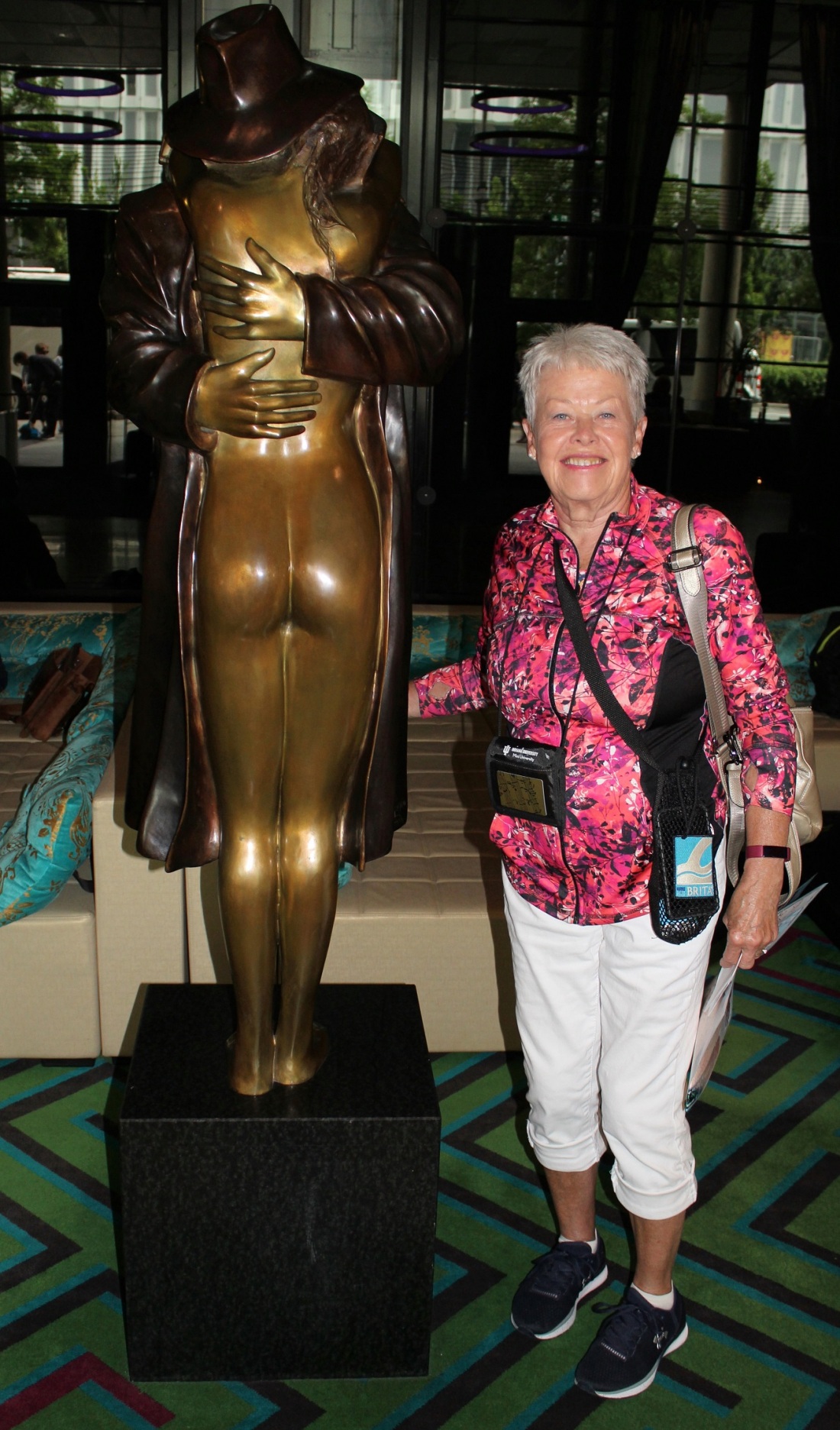 [It’s rather unique, but somehow I missed it when we first entered the place?]

[I mean, the guy doesn’t even have any legs?]

[Now because this is art (in the water outside the opera house), a basic descriptive name doesn’t necessarily follow.  She Lies is a public sculpture by Monica Bonvicini of stainless steel and glass panels measuring approximately 12 metres (39 ft) by 17 metres (56 ft) by 16 metres (52 ft).

The sculpture with Oslo Opera House in the background.  It is a permanent installation, floating on the water in the fjord on a concrete platform, rising 12 metres (39 ft) above the water surface.  The sculpture turns on its axis in line with the tide and wind, offering changing experiences through reflections from the water and its transparent surfaces (Wikipedia).] 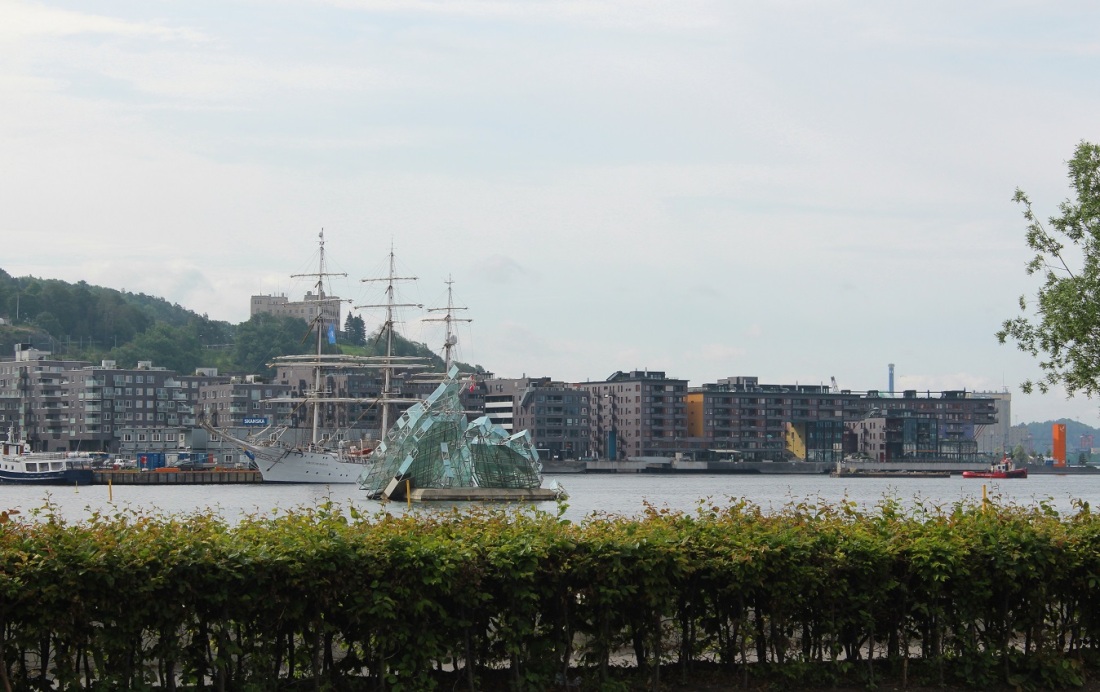 [The Nomadic art project where 1000s of shirts hang outside on gigantic wooden poles at the SALT venue (that brings together art, music, food and architecture with spectacular wooden constructions inspired by the traditional Norwegian racks for drying fish) . . . ] 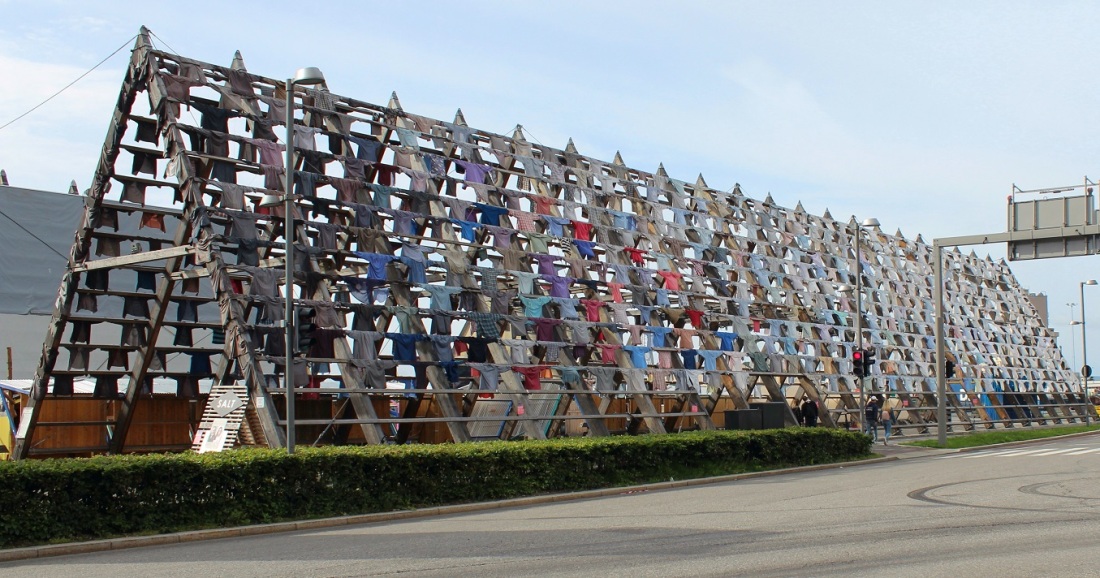 [We left early enough to take a non-direct route to our sightseeing bus . . . ] 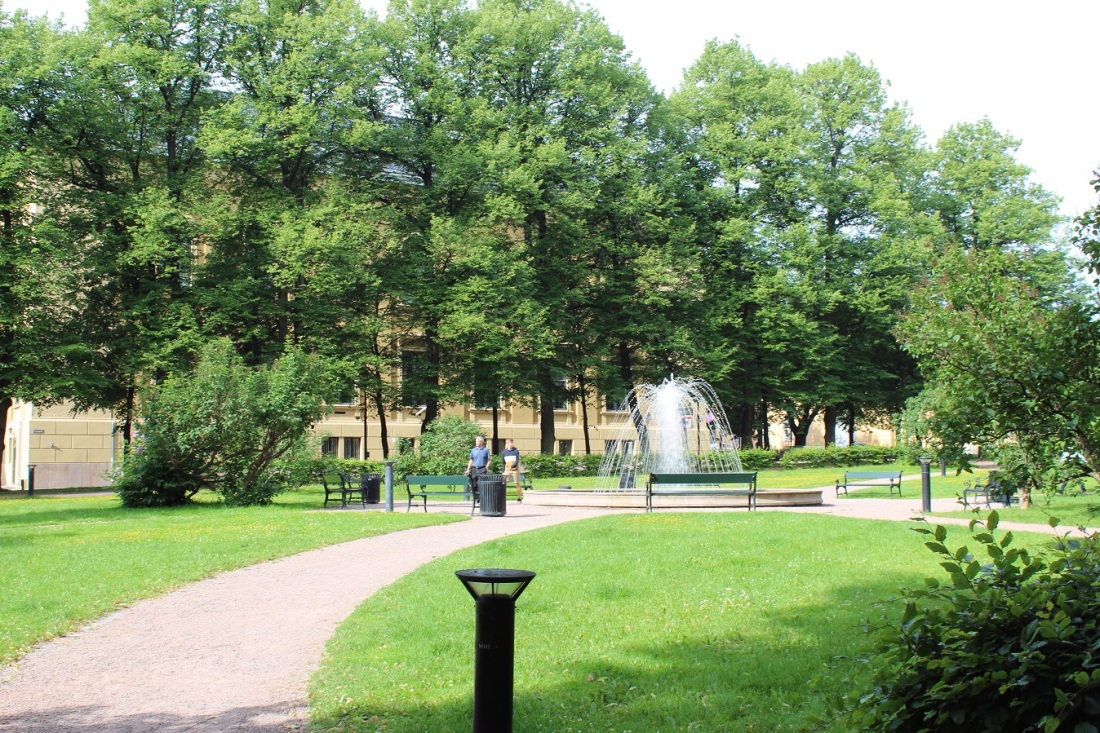 [By all appearances, definitely Norwegian . . . ] 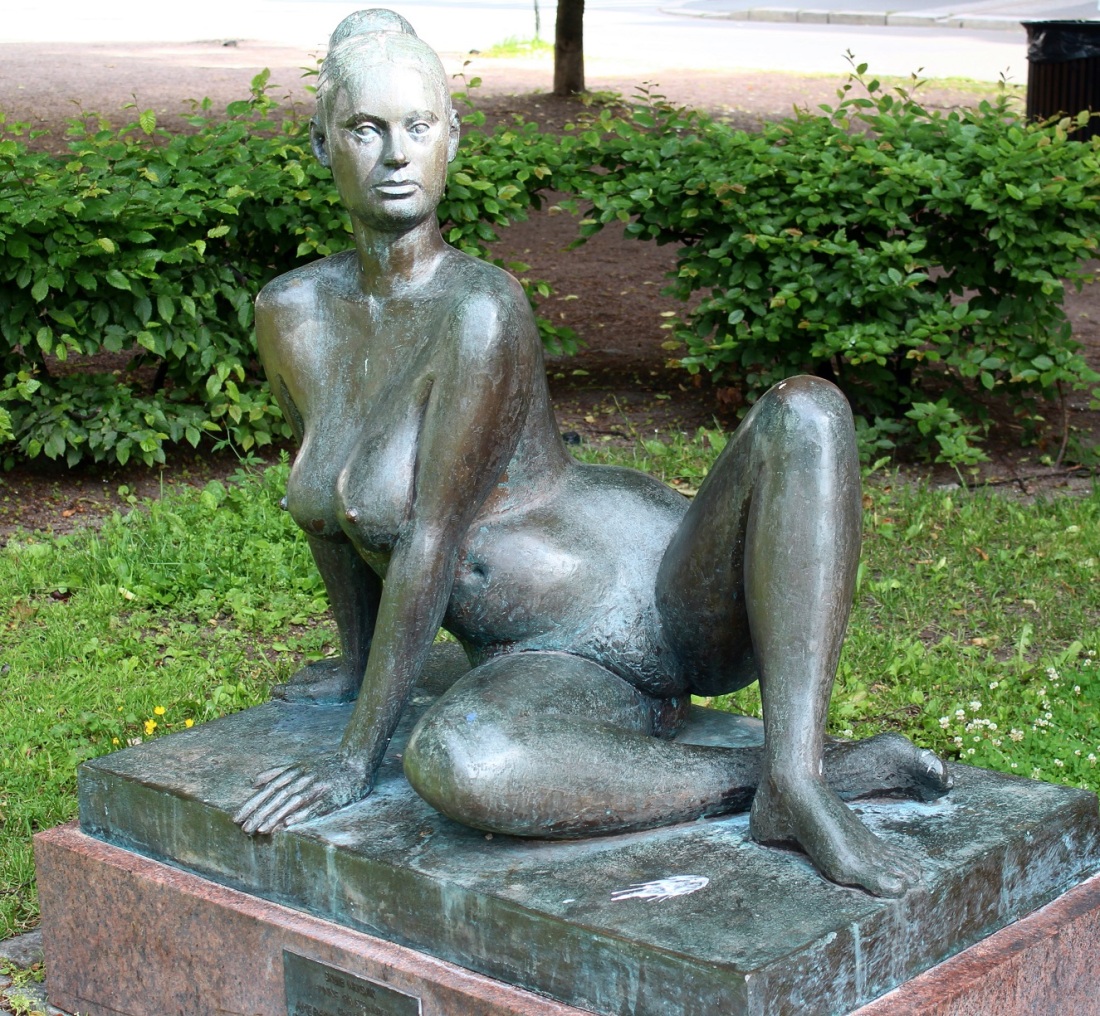 [We’re getting a little military bent here in the neighborhood of . . . ]

[Akershus Fortress (or Akershus Castle) is a medieval castle that was built to protect and provide a royal residence for Oslo, the capital of Norway.  The castle has also been used as a military base, and is today a museum, open for public (Wikipedia).]

[It is not known exactly when the construction of the castle started but it is believed that it took place around the late 1290s, by King Haakon V.  It was constructed [when] it became clear city’s existing defences weren’t effective and therefore, a stronger defensive centre was needed.  The fortress has successfully survived all sieges, primarily by Swedish forces (Wikipedia).] 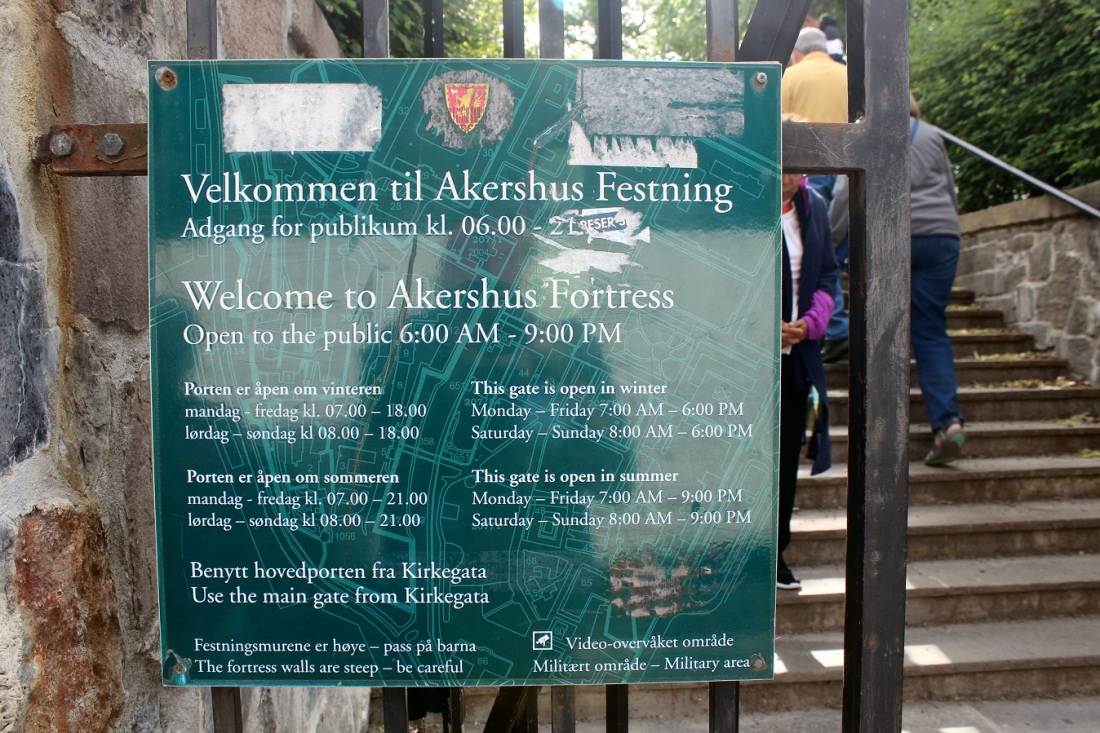 [This large 1970 sculpture is located just inside the entrance to the Akershus Fortress and is by Gunnar Janson. It depicts a huge towering nude woman standing next to a much smaller man who stands naked on a raised block. The pair are in front of an abstract blob-like object.  It is called “Nasjonalmonumentet for ofrene fra andre verdenskrig” or “National monument for victims of World War II” (www.waymarking.com).] 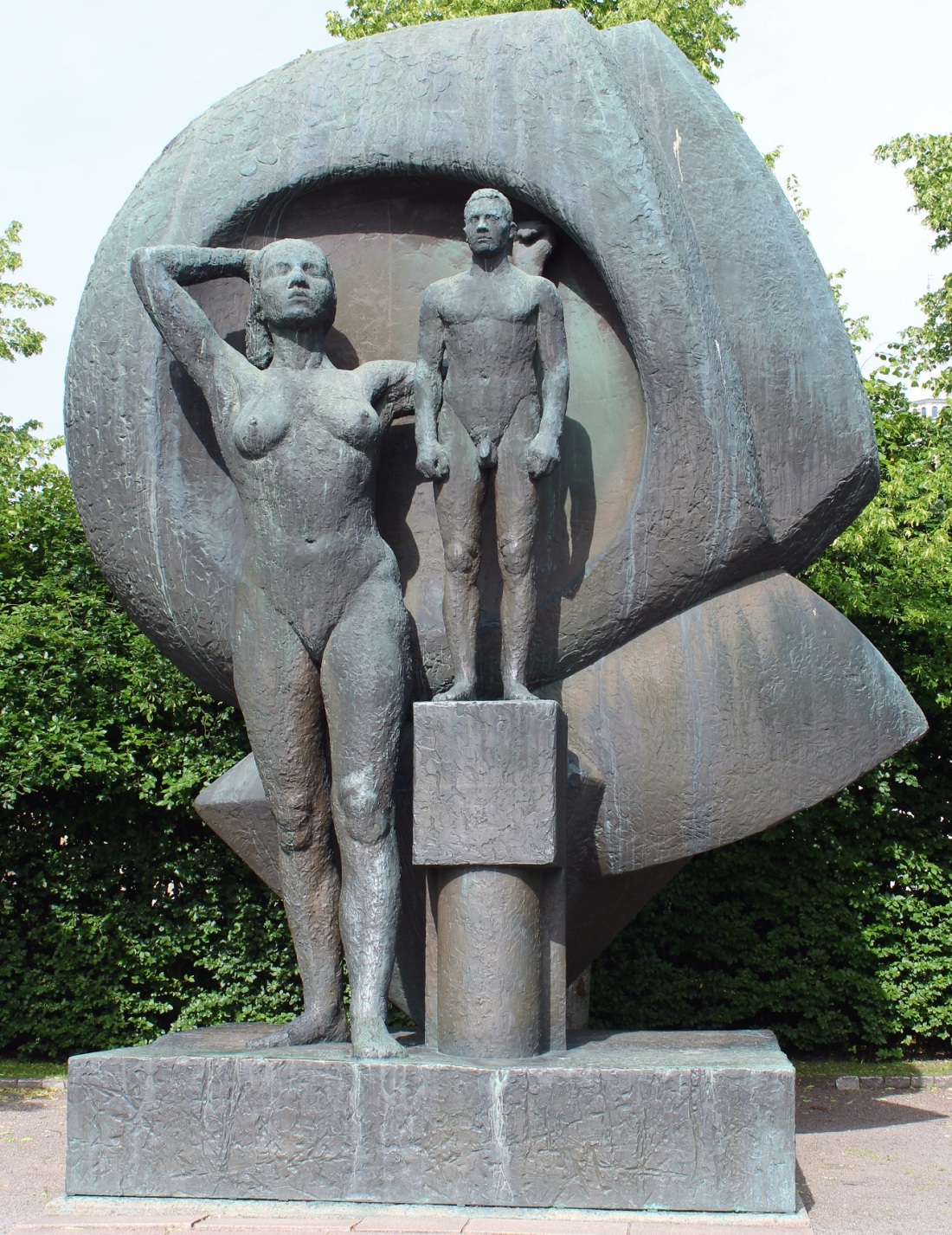 [Shooting from the pedestrian crossover in the following photo . . . ] 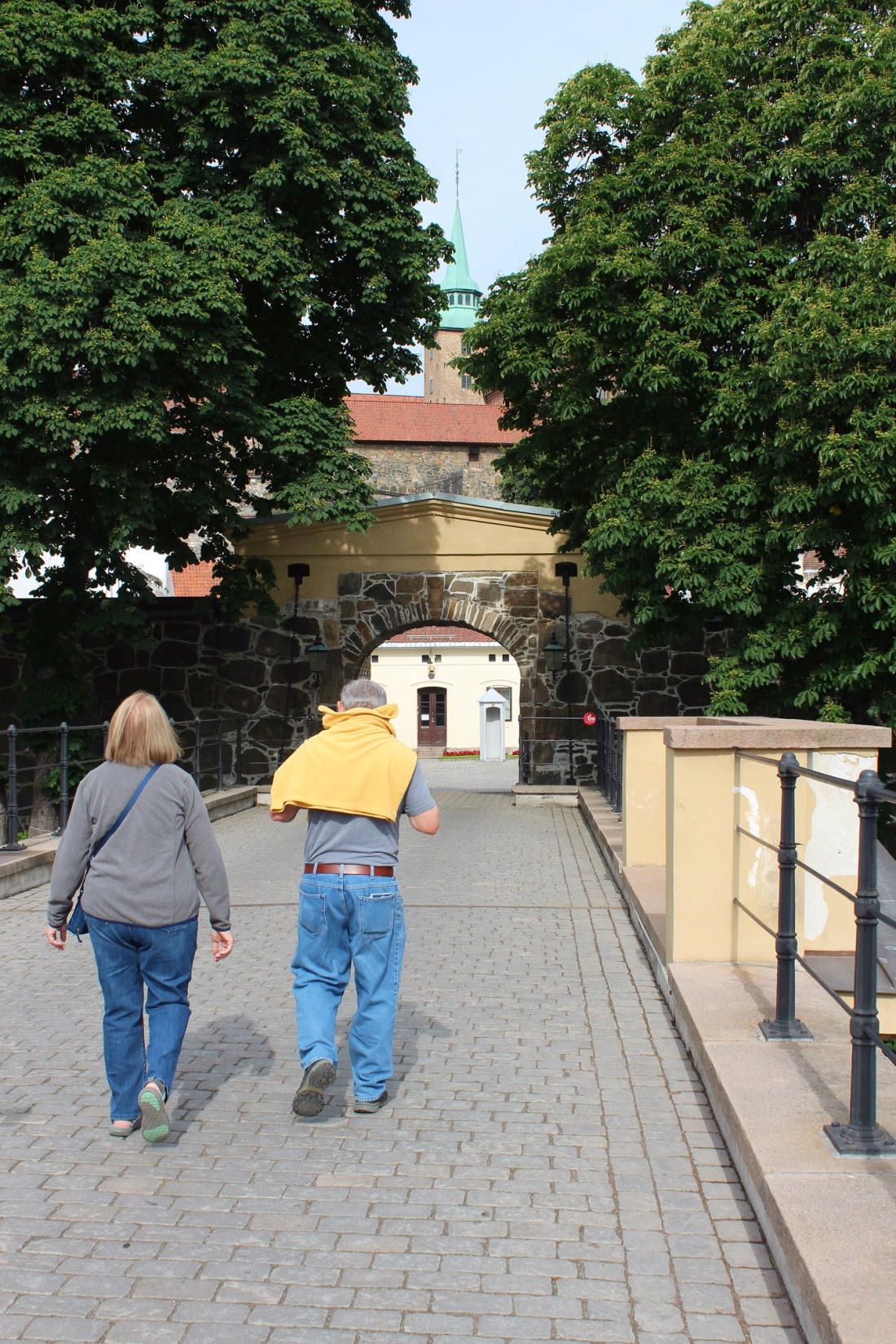 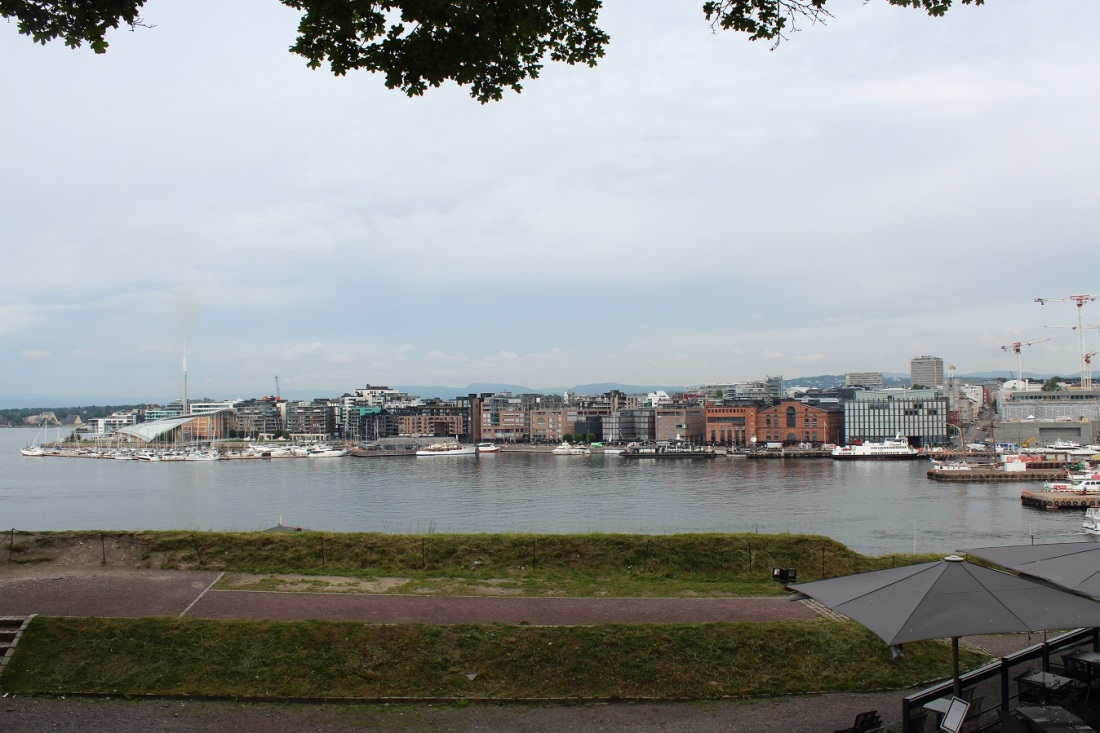 [The double towers (the right one with a clock) center right is City Hall, our destination for catching our tour . . . ] 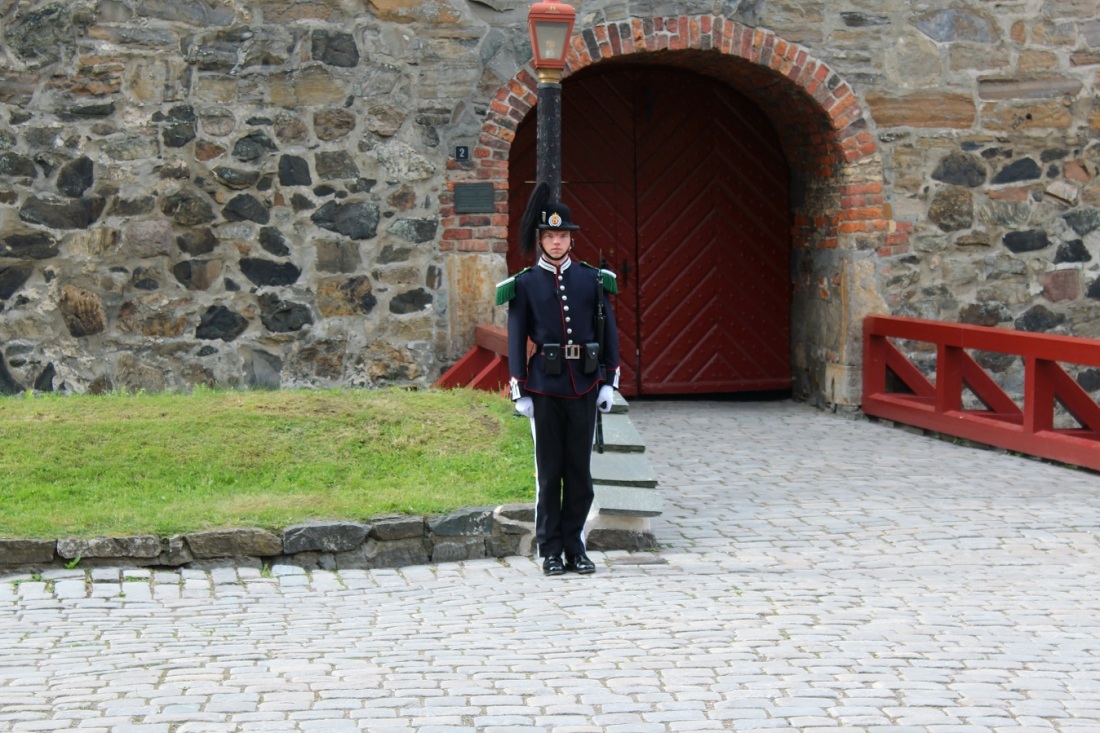 [We’ve wandered back onto the streets again – with Sculpture of the Hand of King Christian IV . . . ]

[This statue is titled “Piperen in Pipervika” (English: Piper in Pipervika), and it was created by Norwegian artist Dyre Vaa in 1972. The statue is located between the Oslo City Hall and the Akershus Fortress. Although this area of Oslo is called Vika, Pipervika was formerly the name given to the area where this statue is located because the military pipers (flutists) from the Akershus Fortress lived here (www.waymarking.com).] 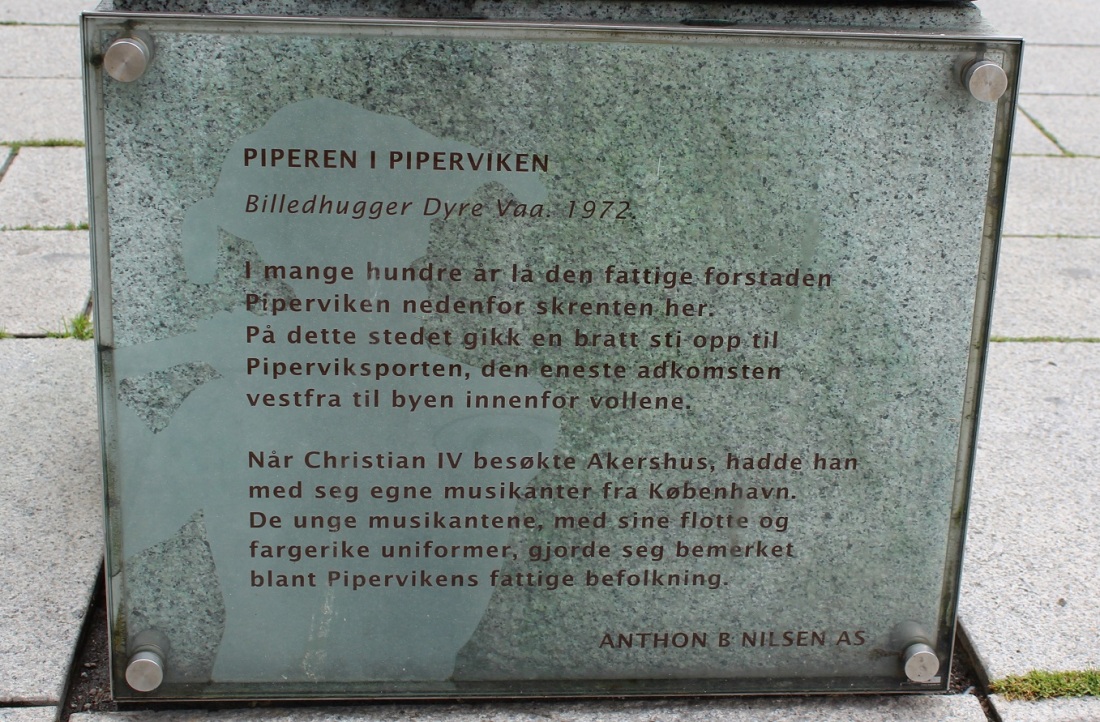 [Exterior sculpture and fountain (built in 1931 by Arneberg and Poulsson) outside the City Hall . . . ] 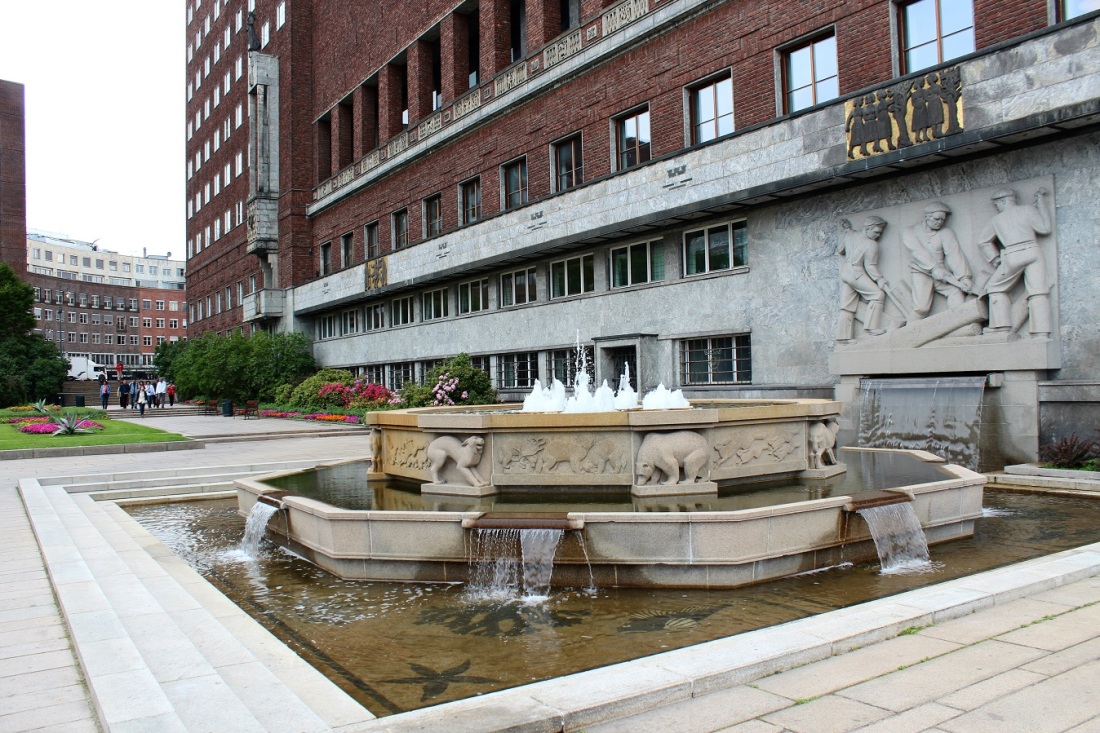 [Memorial plaque to Fridtjof Nansen and the Nansen passport on an exterior wall of Oslo City Hall . . . ] 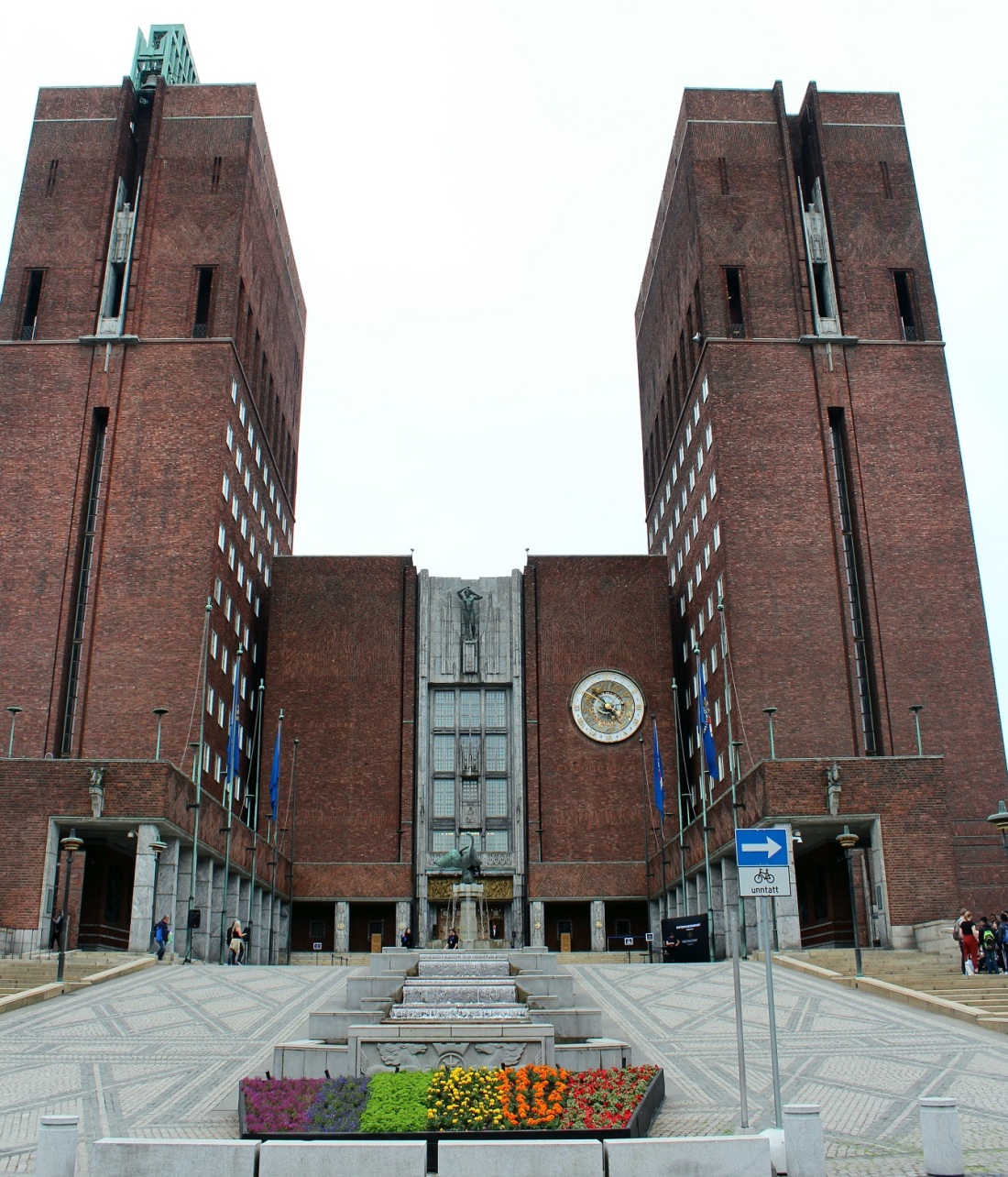 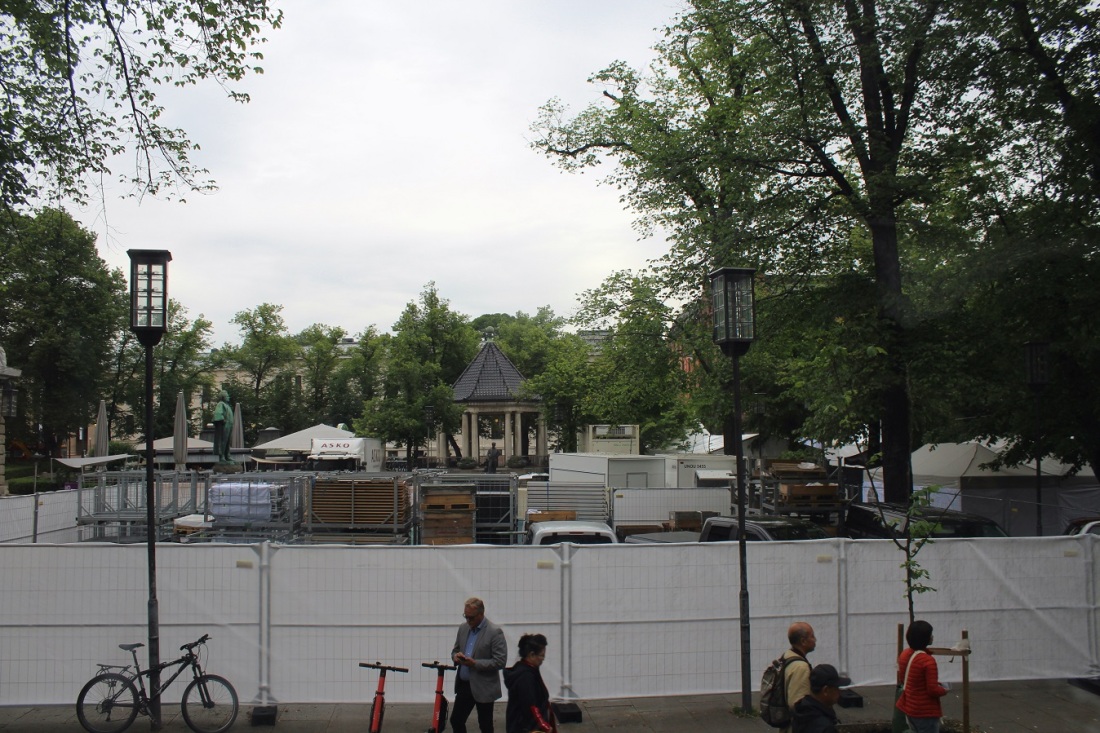 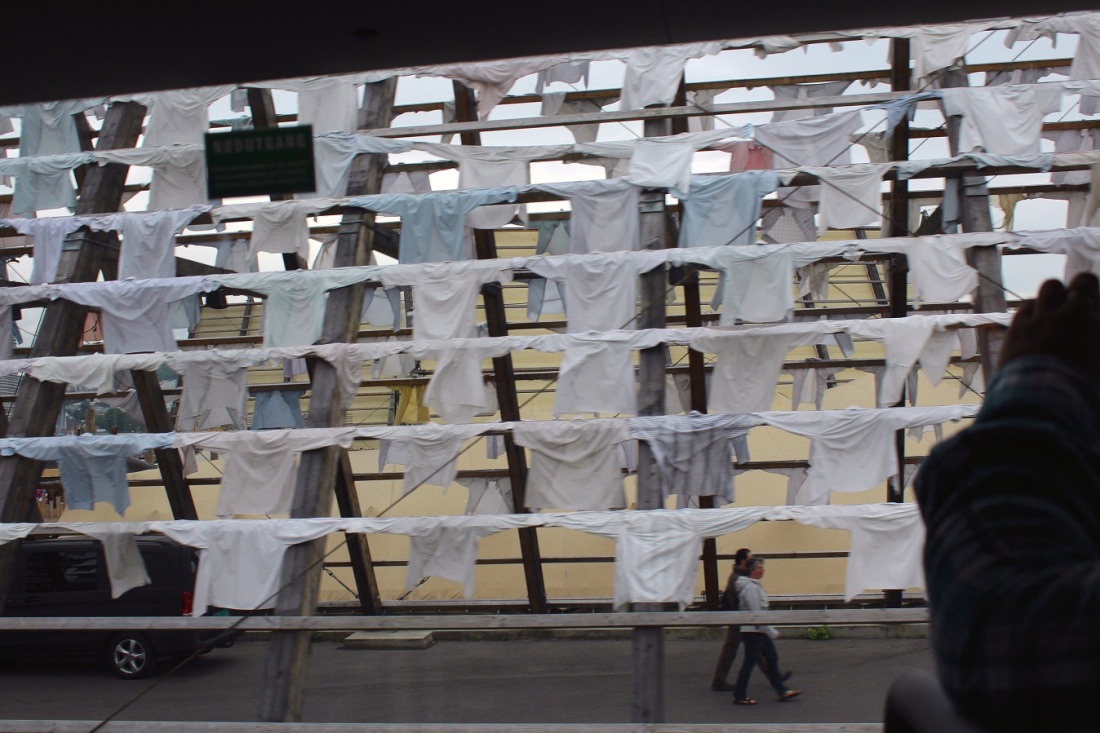 [A busy time at the Opera House as the crowds move about on the exterior “ramps” . . . ] 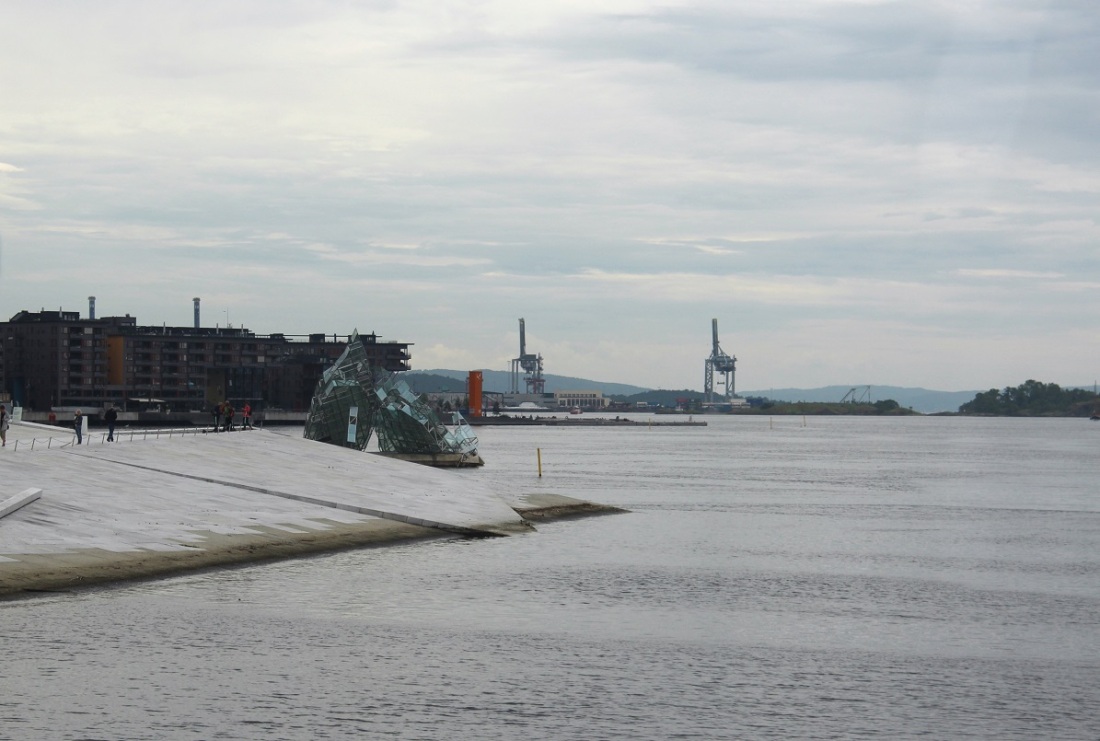 [And the entry area to the Opera House with She Lies in the background . . . ] 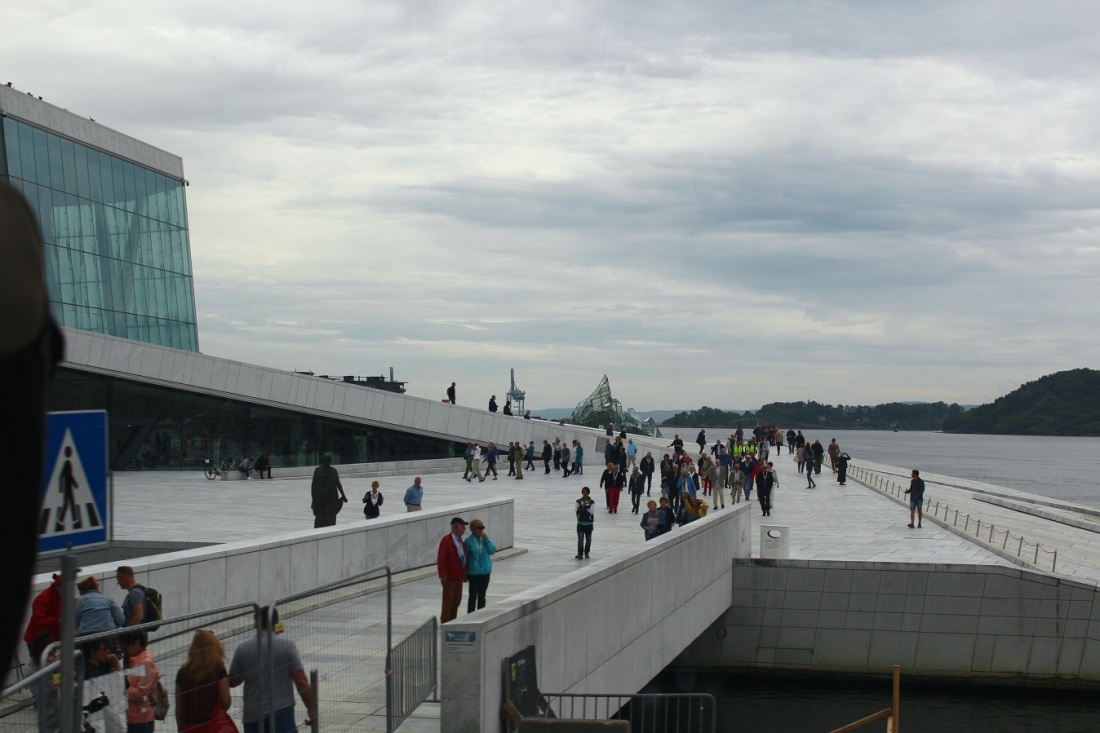 [Seem to waiting for permanent placement in the vicinity of the Opera House?]

[In Roman mythology, Fortuna was a goddess of good or bad luck. Her statue mounted at the wall of Rica Oslo Hotel pictures her with two of her traditional attributes: a sail and a globe, symbolizing the fate and the chance. The statue has been placed there in 2005 (www.waymarking.com).] 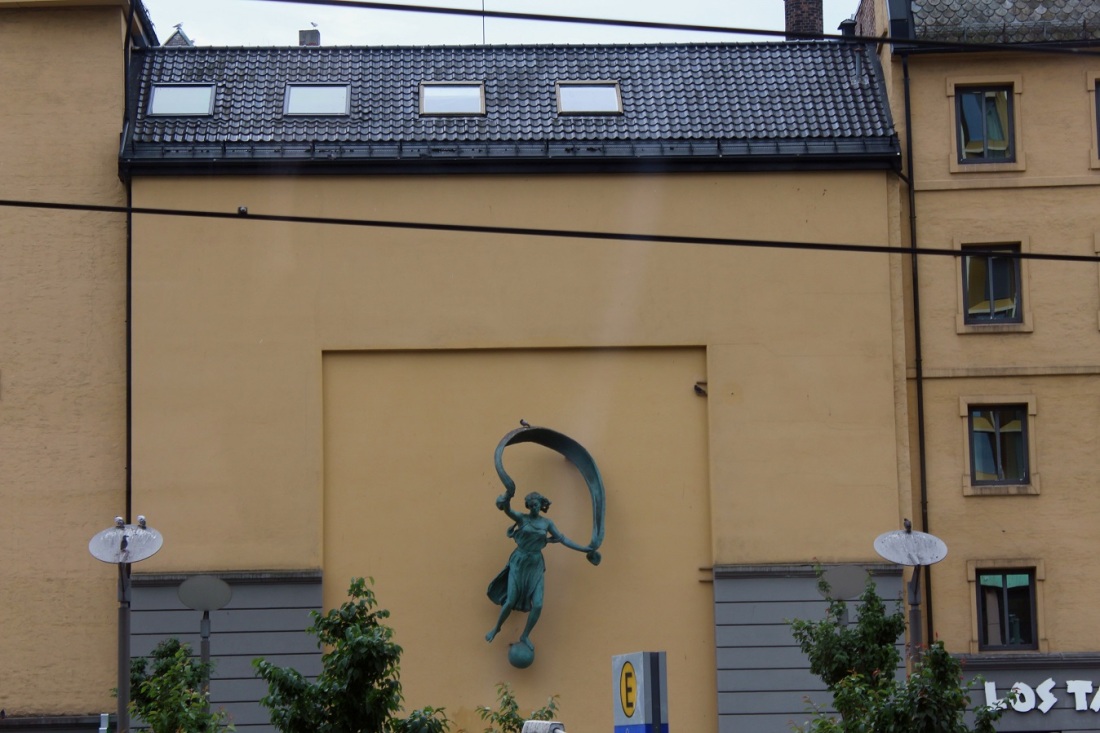 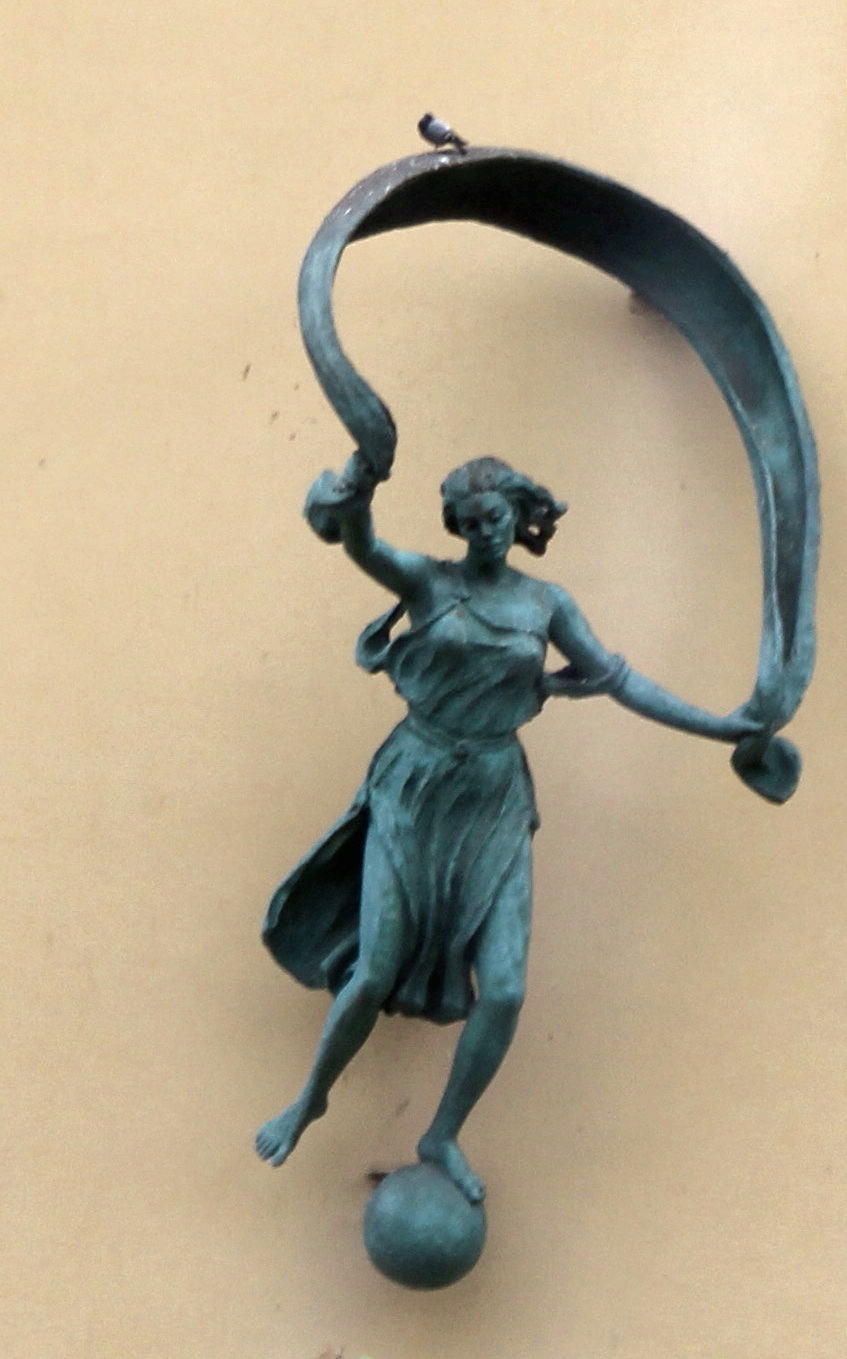 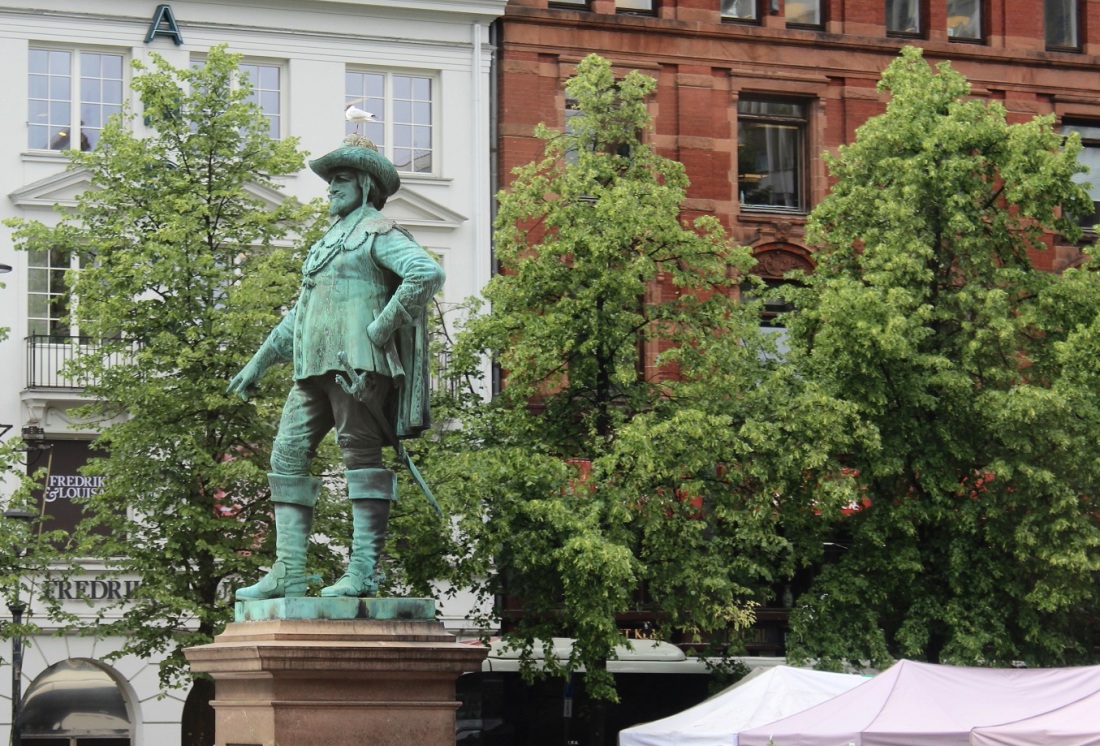 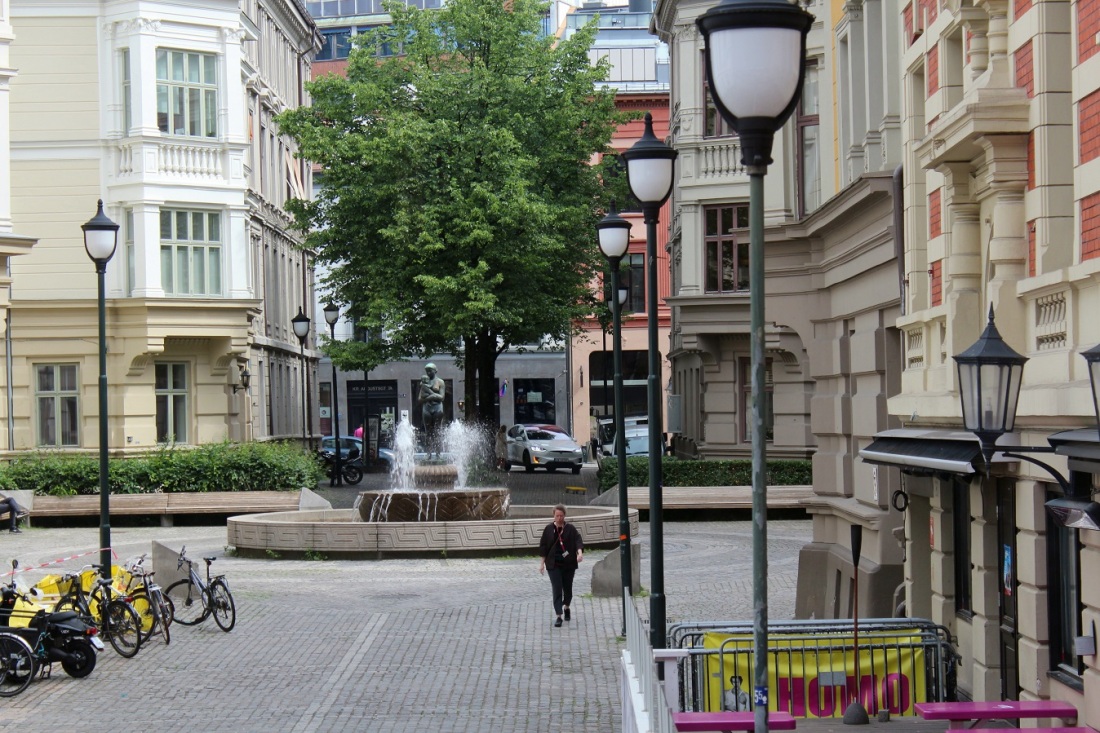 [Construction and re-construction – the nature of the beast everywhere we’ve been the last few years . . . ]

[Either a famous Norwegian or a character in a “Harry Potter” novel . . . ] 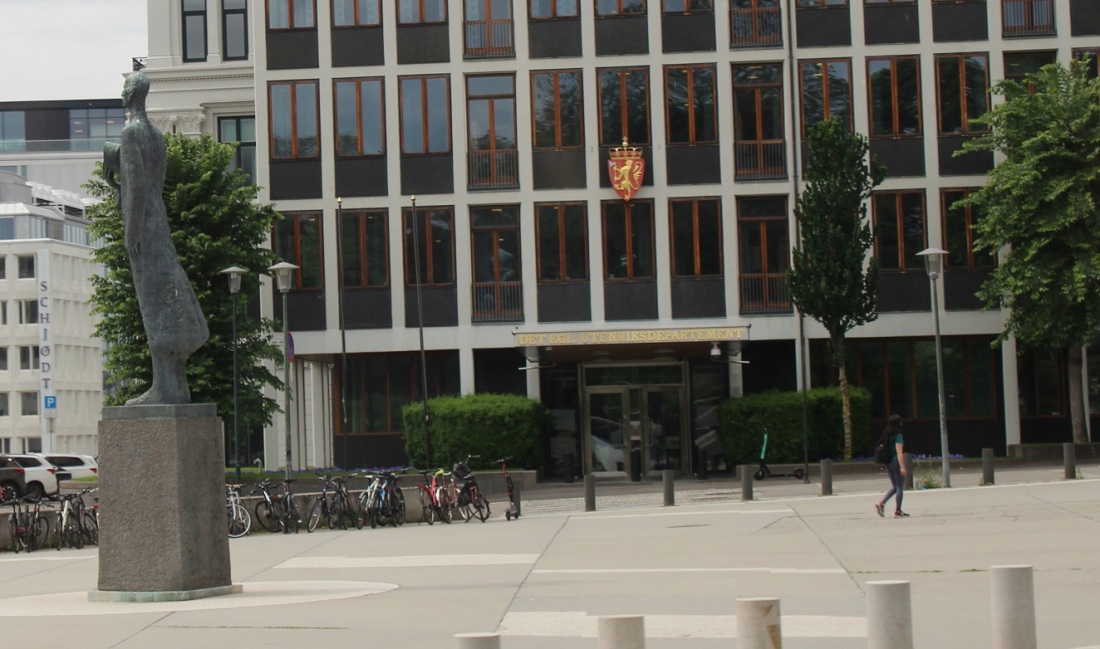 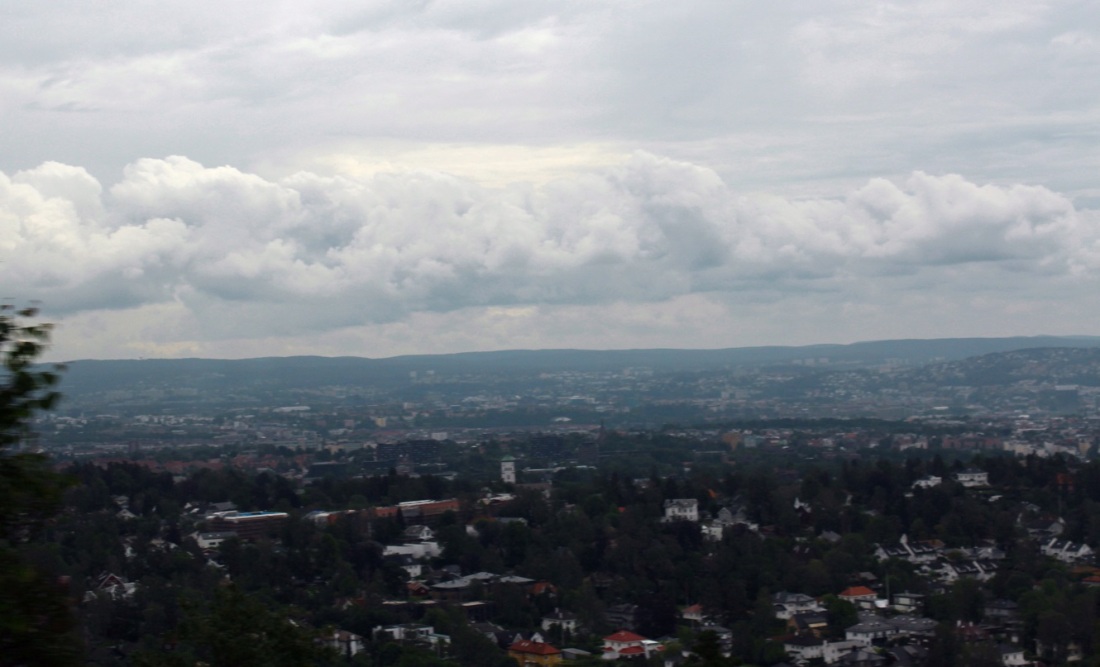 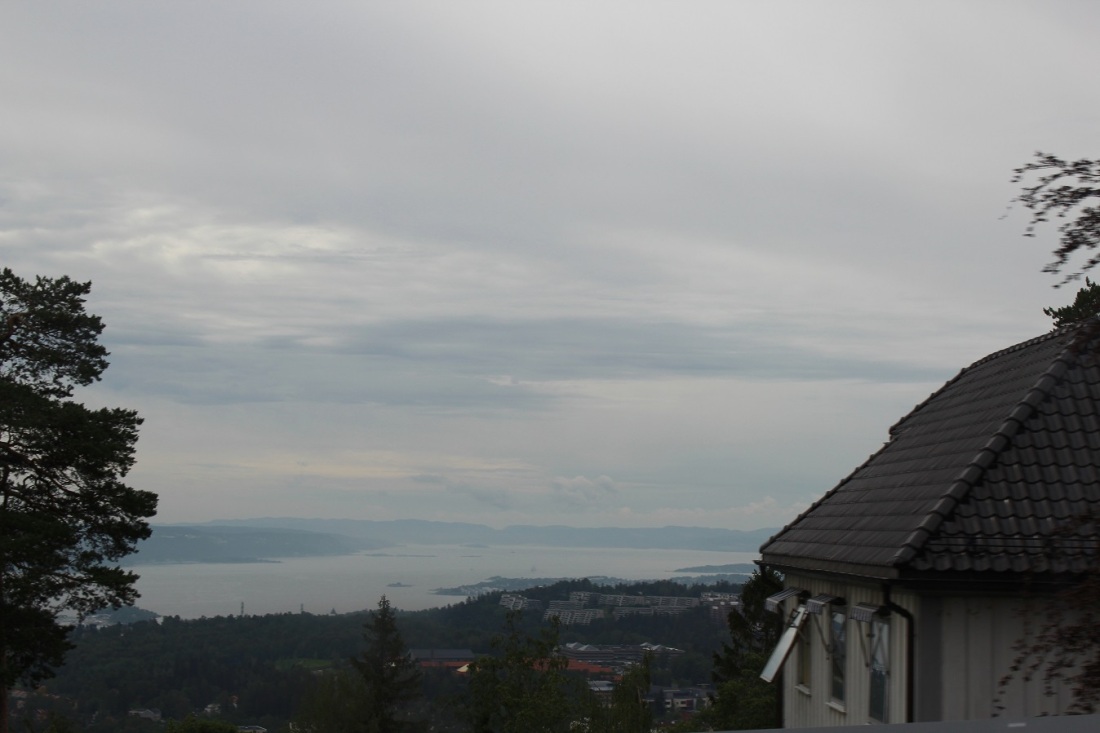 [Our tour guide told us that the physical activities-crazed Norwegians attempt to bike to the top of this mountain without ever letting their feet hit the ground . . . ]

[Holmenkollbakken is a large ski jumping hill.  It has a hill size of HS134, a construction point of K-120, and a capacity for 70,000 spectators.  Holmenkollen has hosted the Holmenkollen Ski Festival since 1892, which since 1980 have been part of the FIS Ski Jumping World Cup and 1983 the FIS Nordic Combined World Cup.  It has also hosted the 1952 Winter Olympics and the FIS Nordic World Ski Championships in 1930, 1966, 1982, and 2011.  The hill is the most popular tourist attraction in Norway, and has roughly one million visitors each year (Wikipedia).] 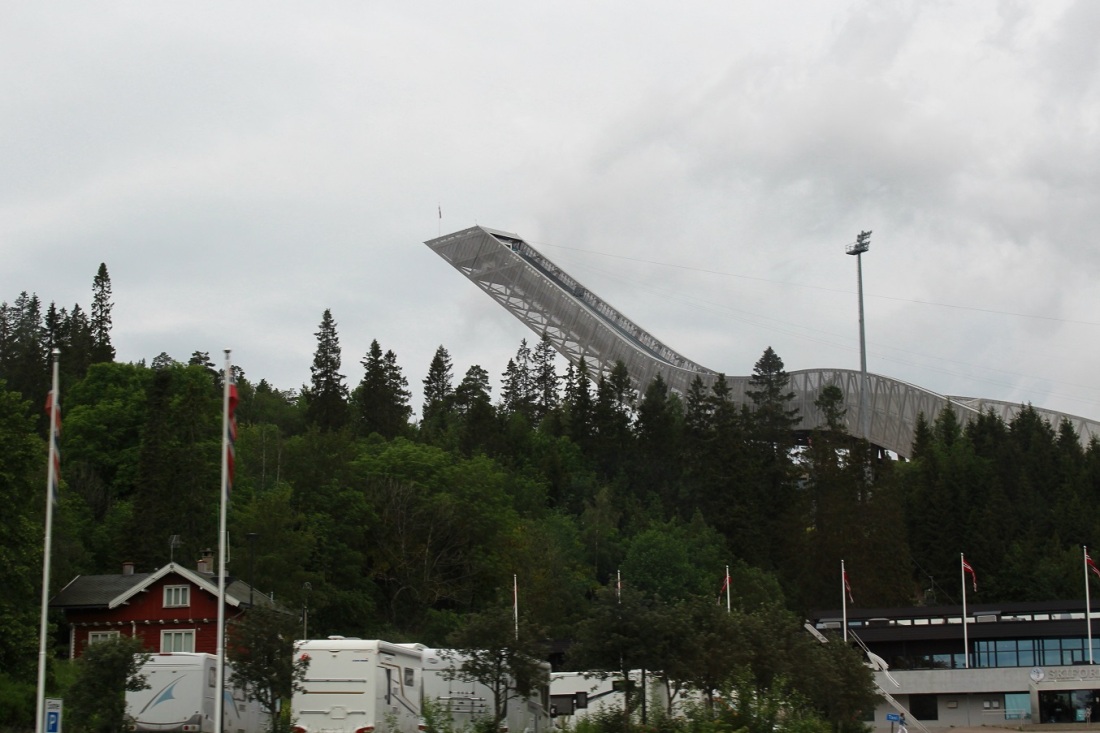 [This is a pretty awesome piece of construction, so I gave it a few shots . . . ] 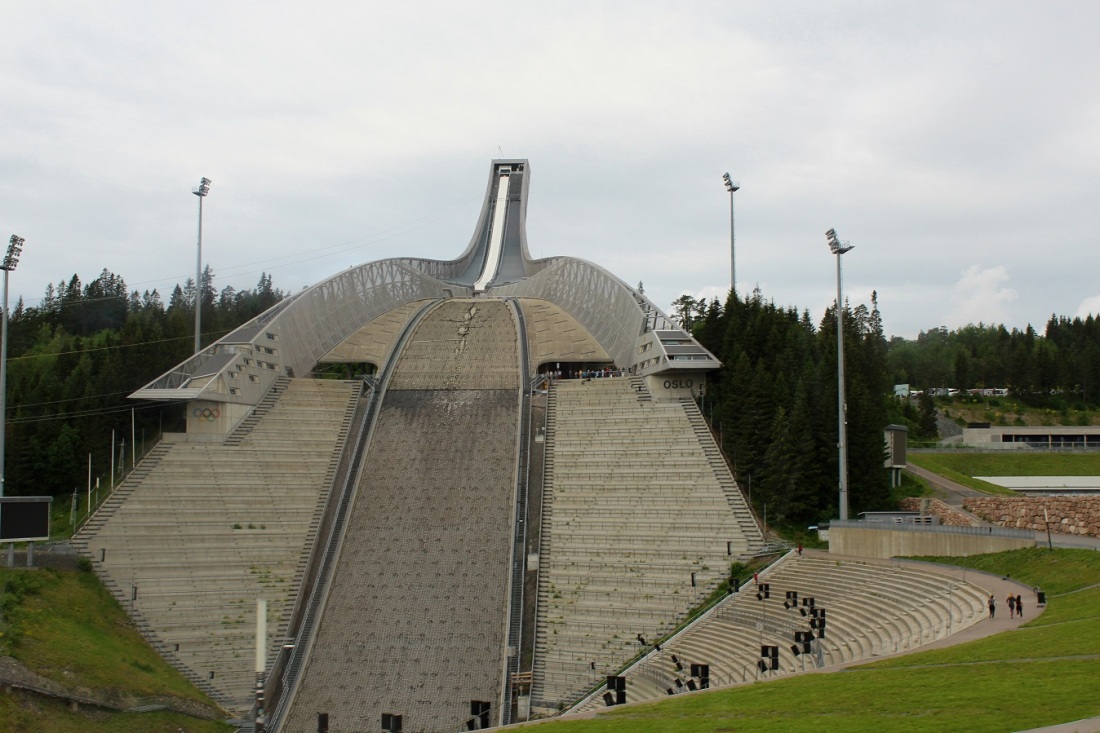 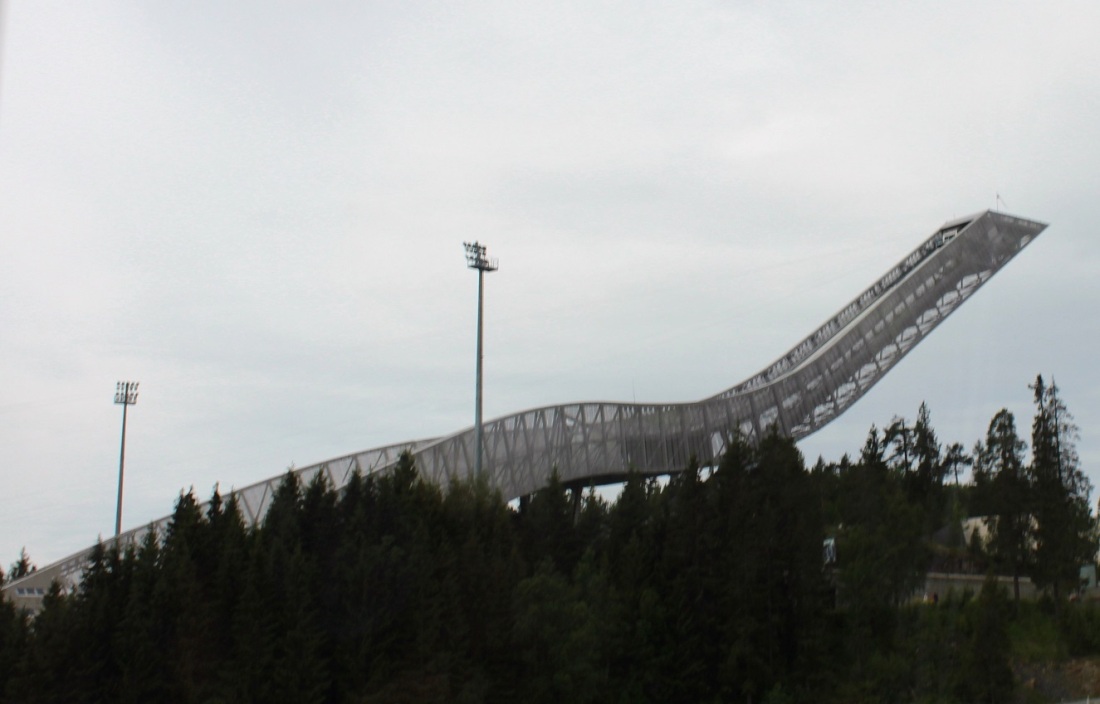 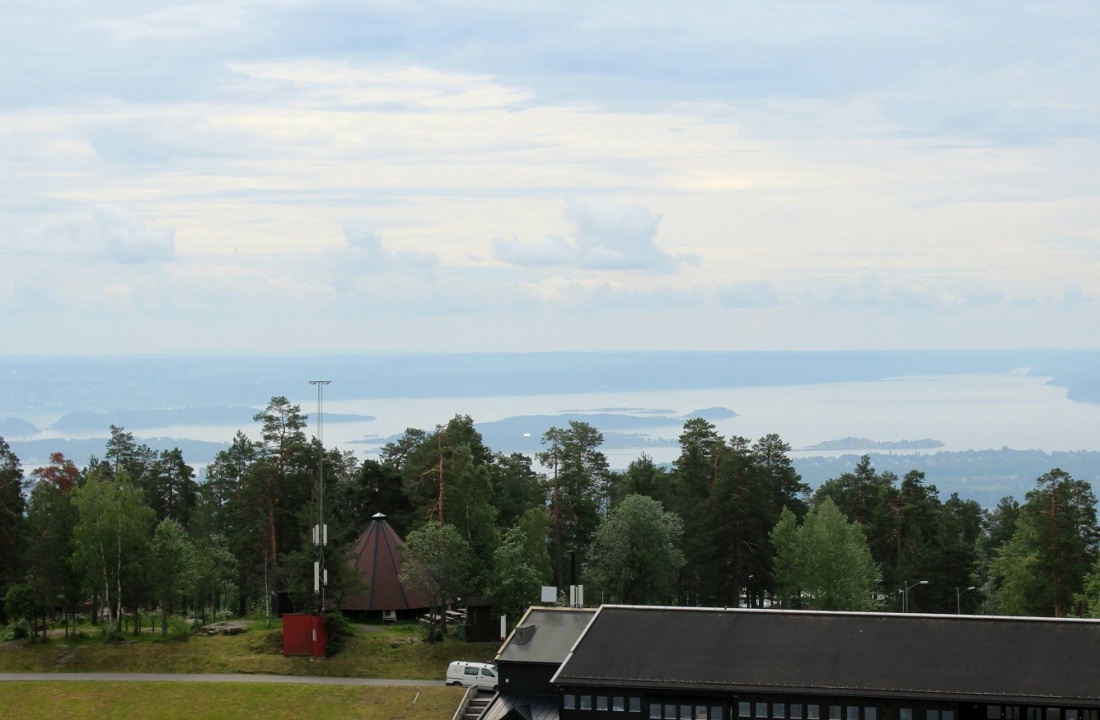 [Serious issues with head alignment with the opening . . . ] 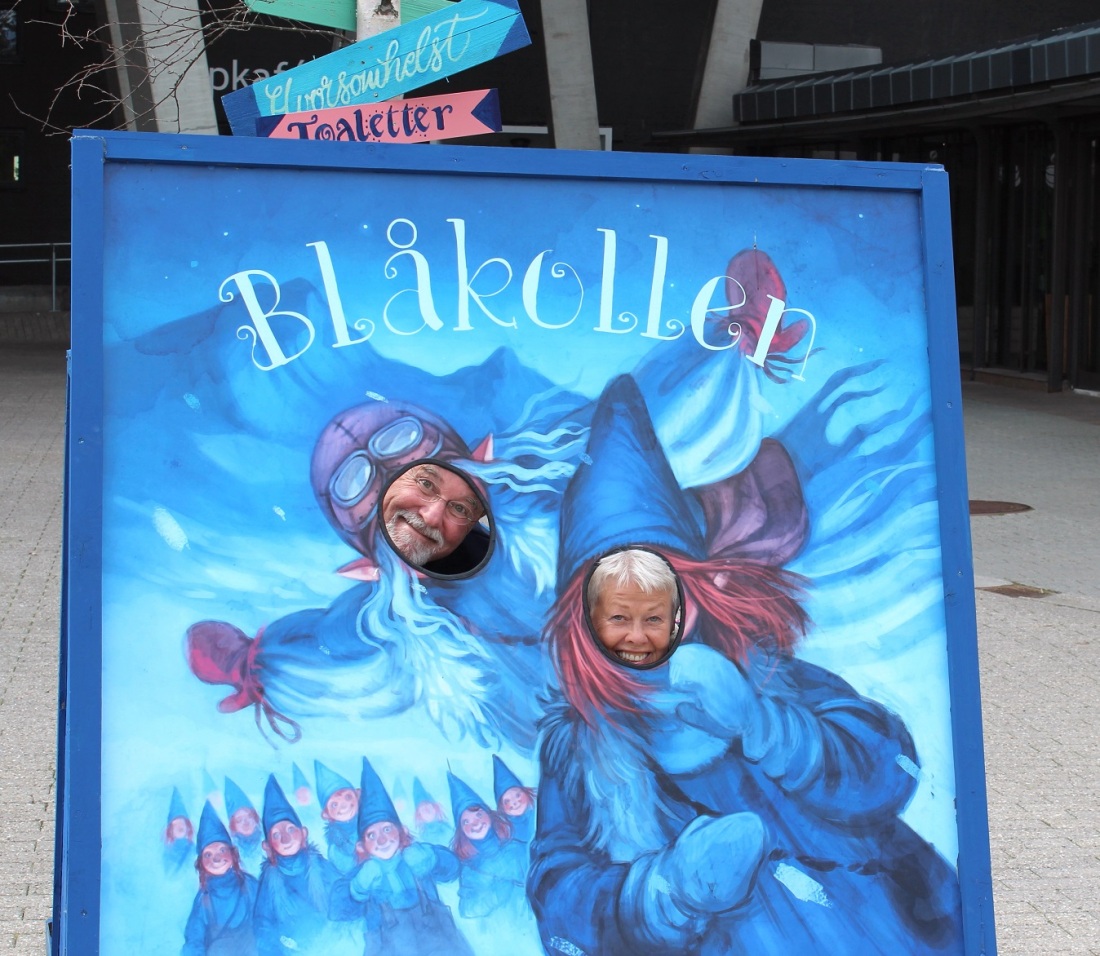 [The famous Norwegian arctic explorer – we’ll see more of him along the way . . . ] 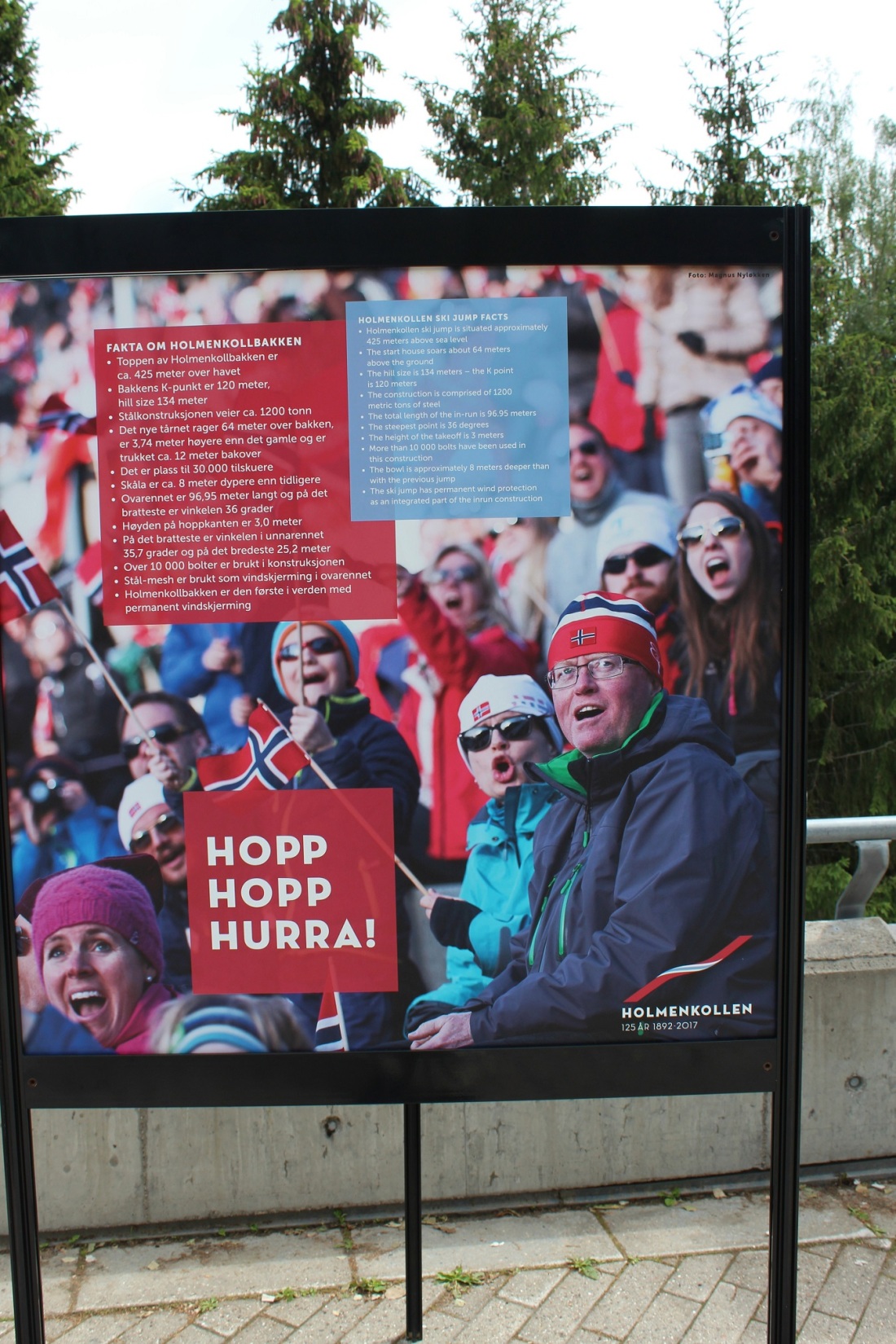 Even without the fence this story had an element of farce.  Thousands of migrants crossed Norway’s Arctic border by bike last year, because by law they could not go over by foot.  ~  Howard Johnson, BBC  [Apparently Norwegians are mocking efforts to build a fence between Norway and Russia.]

Up Next:  The day continues . . . [An aside: as I was just typing a clap of thunder just about bounced me off my stability ball!]

The Journey Begins Thanks for joining me! This is the follow-up to the original, “alexandriacardinals.wordpress.com,” which overwhelmed the system’s ability to handle it any more. Thus, this is “Part 2.” As the original was initially described: 10-26-07-4 “It all began in a 5,000 watt radio station in Fresno, California” . . . wait a minute, that was Ted Baxter on the Mary Tyler Moore Show! Let’s see . . . oh yeah, it all began in 2003 when retirees, i.e., old people, in Alexandria, Minnesota, who had no desire to become snow birds, went looking for mid-winter entertainment here in the frozen tundra of West Central Minnesota. We discovered girls’ high school hockey, fell in love immediately, and it remains our favorite spectator sport to this day. Initially, and for several years, reports on these games were e-mailed to those who were actually snowbirds but wanted to keep abreast of things “back home.” It was ultimately decided a blog would be more efficient, and it evolved into a personal diary of many things that attracts tens of readers on occasion. It remains a source of personal mental therapy and has yet to elicit any lawsuits. ~ The Editor, May 9, 2014 p.s. The photo border around the blog is the Cardinal girls’ hockey team after just beating Breck for the state championship in 2008. It’s of the all-tournament team. The visible Breck player on the left is Milica McMillen, then an 8th-grader – she is now an All-American for the Gophers. The Roseau player in the stocking cap I believe is Mary Loken, who went on to play for UND; and the Cardinal player on the right, No. 3, is Abby Williams, the player we blame most for making us girls’ hockey fans who went on to play for Bemidji State. *********************************************************************************** Photos contained herein are available for personal use. All you have to do is double click on any of the photos and they will become full screen size. You can then save them into your personal “My Pictures” file. They make lovely parting or hostess gifts, or holiday gifts for such as Uncle Ernie who wants to see how his grand niece is doing on the hockey team. If any are sold for personal profit, however, to, for example, the Audubon Society, National Geographic, Sven’s Home Workshop Monthly, Curling By The Numbers, or the World Wrestling Federation, I only request that you make a donation to the charitable organization of your choice. You have two hours and fifteen minutes. Pencils ready? Begin! ********************************************************************************** View all posts by tomobert63